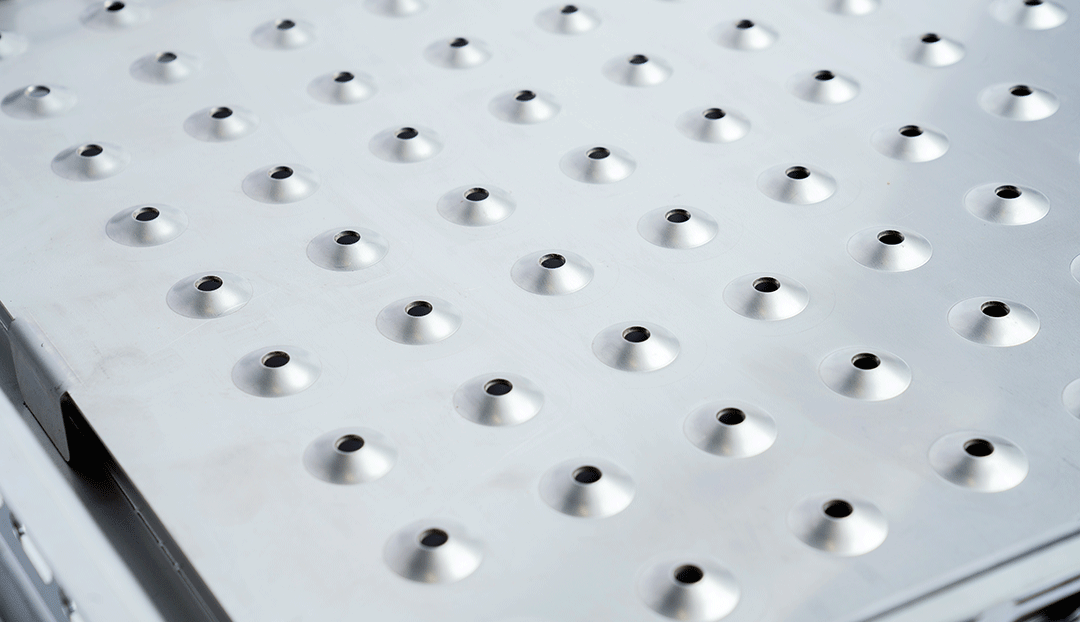 The MAK Grills FlameZone was the first direct-heat system on the pellet grill market, making MAK the first pellet grill that could actually live up to its name. While others have tried to replicate it, the FlameZone stands alone as the most effective true pellet grilling solution. The funnel FlameZone allows you to sear and grill to perfection and improves performance at low heat. It’s a feat of American engineering and outperforms the competition in many ways.

The funnel FlameZone is constructed of nearly forty pounds of domestically sourced 14 gauge 304 marine-grade stainless steel. Its 13 individual parts are shaped over 50 times and subjected to between 6 and 10 different processes to transform them from sheet metal to finished product.

All of these processes are completed in our shop in Dallas, Oregon, by our crew. Every FlameZone is welded, ground, deburred, and assembled by hand. In order to maintain our 1/10,000th of an inch tolerance standard, we use high-tech machines like lasers, CNC forming machines, and TIG welding to maintain a quality level not seen elsewhere in the BBQ industry.

The FlameZone Pan is designed to provide maximum airflow, grease runoff, heat & smoke distribution, and structural integrity. The pan is shaped and angled to prevent warping and to channel grease to flow only where you want it to. It is skirted to avoid the large gaps between the body and pan that are common in pellet grills. This prevents grease from dropping into the pit and catching fire or mixing with ash. It also directs and distributes heat evenly over your entire cooking surface instead of concentrating it in the middle.

Sear and Grill on the Entire Cooking Surface

There are 88 conic vents stamped into and spread across the surface of the FlameZone Pan. These vents are just large and angled enough to allow heat to come in direct contact with your food, but small and shallow enough to prevent the flame from escaping, while helping grease flow down into the grease trap. This reduces the risk of flare-ups and grease fires, while preventing the direct flame from drying out the food.

Two FlameZone covers allow you to choose between convection cooking or cooking with direct heat across half or all of the cooking surface. If you need or want to use two-zone cooking, you can do that on your MAK. These covers also allow you to transition from convection cooking to high-heat pellet grilling in minutes, which is especially useful for things like reverse searing.

These features alone make the FlameZone system advantageous over other solutions.

In 2017 the FlameZone underwent its most substantial change since its original creation. This change was almost four years and more than twenty design iterations in the making.

Instead of the FlameZone pan resting inches above a large diffuser and otherwise open pit, we now use a funnel system that sits just above the firepot and drastically improves all aspects of our grills’ cooking ability.

Almost all pellet grills have hot spots caused by high heat deflecting off of the diffuser diagonally into the corners of the grill. Some try to enable you to grill by adding a “zone” to your pan which is perforated or open in some way so that heat can move directly upward. These solutions are often designed to allow the flame to escape and come in direct contact with your food. With the funnel FlameZone, heat is directed immediately upward and distributed evenly across the entire surface of the cooking area. No flame escapes to dry out your food. Just infrared heat. To the best of our knowledge, the funnel FlameZone is the ONLY true pellet grilling solution that creates direct heat and indirect flame across the entire cooking surface. This has substantial benefits.

Where the pit of the grill may have previously been close to the same temperature as the grates, it is now less than half, due solely to the ambient heat of the stainless steel firepot.

Because heat isn’t wasted in the bottom of the pit where it isn’t needed, pellet consumption is reduced substantially. This doesn’t just apply to high-heat cooks. At low temperatures, more efficient heat distribution means that more time can pass before pellets are added to the firepot. This allows the pellets to maximize clean smoke output.

This also substantially decreases the time it takes to reach setpoint and maximum temperatures, while increasing maximum potential temperatures.

The FlameZone takes pellet grill versatility to the next level. Smoke, bake, or grill your favorite foods to perfection on one machine. The FlameZone makes outdoor cooking easier, more consistent and more effective than ever before.

Here at MAK, research and development is an everyday occurrence. We're constantly experimenting so that we can continue to innovate and improve our products. We aim to perfect the outdoor cooking experience and we want you to be up to date on our progress. We regularly post news, information, recipes, and more! Sign up for our newsletter so you never miss an update! Subscribe to Our Newsletter
Back to News Home